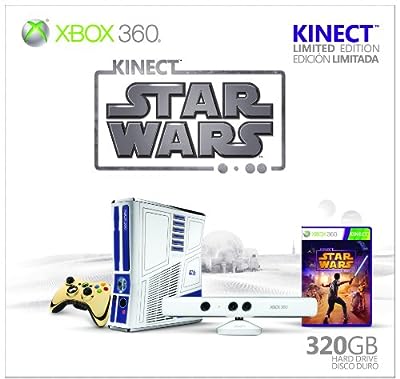 Xbox 360 Bundle: Bring the Star Wars characters you know and love into your living room with this custom R2-D2-themed Xbox 360 console with custom sounds. Features C-3PO as an unlockable character for the Dance Mode in the Kinect Star Wars game. Kinect Sensor: Includes the first ever custom white sensor. Immerse yourself into the Star Wars universe with full-body gameplay. Xbox 360 Wireless Controller: Includes custom C-3PO-themed Xbox 360 Wireless Controller. Kinect Star Wars game: Enter the Star Wars universe like never before. Use the Force like a Jedi, become a champion Pod Racer, pilot iconic ships and much more. Kinect Adventures game: Get off the couch and into the game in a whole new way. You and your friends and family will jump, dodge, and kick your way through 20 pulse-pounding adventures set in exotic locations. 320GB Hard Drive: The largest hard drive available on Xbox 360, Xbox 360 Wired Headset, and Xbox LIVE Token for exclusive downloadable content,built-in 802.11n Wi-Fi built-in for a faster and easier connection to Xbox LIVE